The animal science expert and autism advocate will receive an honorary degree at the Aug. 1 online event

Temple Grandin, professor of animal science at Colorado State University, industrial designer, and an advocate for autistic people, will deliver the keynote speech for Lafayette’s Commencement ceremony, which will be presented online on Aug. 1. 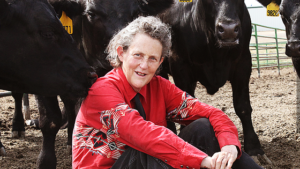 Grandin is a consultant and designer of livestock-handling facilities. It is estimated that half the cattle in the United States and Canada are handled in equipment she has designed for meat plants.

In addition to being a consultant, author, inventor, and lecturer, Grandin is a leading specialist and lecturer on autism, a condition that she has had since birth. She helped decode the thinking processes of both humans and animals.

Grandin is the subject of the BBC documentary The Woman Who Thinks Like a Cow (2006) and HBO movie Temple Grandin (2010). She also is featured in Oliver Sacks’ book An Anthropologist on Mars: Seven Paradoxical Tales (1995).

She has received the Double Helix Medal from Cold Spring Harbor Laboratory, for communication with the public on autism (2011); Meritorious Award from the World Organization for Animal Health, Paris, for outstanding services to the world veterinary community (2015); and election as a Fellow of the American Association for the Advancement of Science (2018).

She holds a master’s and doctoral degrees in animal science from Arizona State University (1975) and the University of Illinois (1989), respectively. She majored in psychology at Franklin Pierce College (1970). She is the recipient of honorary degrees and other honors from nearly 20 institutions in the United States, Canada, Europe, and South America, including Penn, Columbia, Duke, Emory, Carnegie Mellon, McGill, Swedish University of Agricultural Sciences, and University of Buenos Aires.