Prof. Eric Ziolkowski and colleagues have earned a Choice award for Encyclopedia of the Bible and Its Reception Online.

Encyclopedia of the Bible and Its Reception Online, which Eric Ziolkowski, Manson Professor of Bible and department head of religious studies, has helped produce as both a main editor and contributing author, has been selected as one of the few Outstanding Electronic Academic Titles for 2020 by Choice, a publishing unit of the Association of College & Research Libraries, the largest division of the American Library Association. 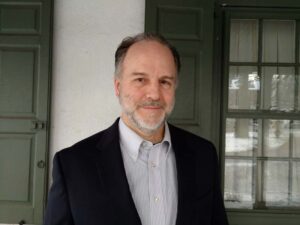 The award recognizes “outstanding works for their excellence in presentation and scholarship, the significance of their contribution to the field, their originality and value as an essential treatment of their subject, and significance in building undergraduate collections.”

In addition, the first volume of Eric’s edited handbook, The Bible in Folklore Worldwide: A Handbook of Biblical Reception in Jewish, European Christian, and Islamic Folklores, is called “a revolutionary book, shifting the research paradigm of ‘folklore in the Bible’ to ‘the Bible in folklore’” in a book review by Dan Ben-Amos, a noted specialist Jewish and African folklore at Penn. The review appeared in last month’s Review of Biblical Literature.

Eric is completing the manuscript of the second volume of that edited handbook, which bears the title A Handbook of Biblical Reception in Africa, the Americas, Asia, and Oceania.

For scholars and general readers

EBR is a tool for scholars in biblical, cultural, and religious studies and related fields, but also accessible to general readers interested in the biblical topics. It is available in both a print and an electronic version.

In 2010, EBR received the Choice award for its first print volumes. A decade later, it has earned it again in part because of its consistent publication schedule, producing about 1,500 new articles every year.

Publisher De Gruyter notes that the award for the online version “demonstrates the current and future importance of digital reference works, especially now when libraries are closed in many places.”

EBR is the first comprehensive encyclopedia of interdisciplinary and international biblical reception, with Hebrew Bible/Old Testament, New Testament, and historical contexts. It spans biblical reception in Judaism, Christianity, Islam, and other religions as well as in literature, visual arts, music, and film.

Read a statement from its editors about the general concept behind EBR.

What do you find interesting and meaningful about working on the encyclopedia project?

Both the focus of EBR and the kind of editorial work-process EBR entails make it enjoyable for me. Regarding the project’s focus, the Bible is arguably the most widely read and most influential book in the world. As I am a specialist in religion and literature, my own scholarly projects constantly draw me to topics that in one way or another, and to varying degrees, bear upon biblical studies and consideration of the exploration of biblical reception—the truly limitless study of how the Bible has been read, interpreted, used, abused, and adopted, adapted, and transformed not only by Jews, Christian, and Muslims, but by peoples of other non-biblically derived religions, as well as in folklore, literature, visual art, music, film, dance, and other media. At the same time, regarding work process, my natural inclinations as a scholar are eremitic. The sort of research and writing I do requires me to work intensely for long hours in solitude; I like that. However, one reason I took on the role of main editor of reception for EBR back in 2004 and have remained with the project ever since (as we have progressed alphabetically, and have now reached volume 19 of our prospective total of 30 volumes) is that I looked forward to the experience and intellectual stimulation of working as part of a large international team of editors, all top-tier scholars, on a massive, pathbreaking, collective scholarly enterprise—one that to date has drawn contributions from roughly 4,000 scholar-authors literally around the world. The connections and friendships I have forged with colleagues from Norway to Israel, or from Ghana to Hong Kong, are invaluable.

I have written and given numerous talks about the EBR enterprise, and about the cultural value of first-class encyclopedias and other reference resources, particularly in religious studies and related fields. See, for example, “Editing Encyclopaedias and Handbooks in Religious Studies in the Twenty-First Century,” special issue of Relegere: Studies in Religion and Reception 5.2 (2015). See also my article “Dispatches from EBR: A Report on Volumes 1–10 (of 30), with a Special Focus on Reception-Related Matters,” Journal of the Bible and Its Reception 1 no. 2 (October 2014) 285–308.

What's an important lesson or fact that you've learned by working on it?

One of the most important lessons I have learned from working on EBR has to do with its radically interdisciplinary nature, stemming from what makes the project unique, namely, that it is the first single encyclopedia to combine comprehensive coverage of the Hebrew Scriptures, New Testament, and also the Apocrypha and Pseudepigrapha, with extensive, up-to-date consideration of reception of those scriptures and texts around the world—in Judaism, Christianity, Islam, and non-Bible-related religions, as well as in literature, folklore, visual arts, music, dance, etc. In order to succeed in its mission, EBR has to have an editorial board of half a dozen main editors and close to several dozen area editors sufficiently varied in their disciplinary specializations to handle such a broad array of fields and sub-fields of study. What this means is that whenever the main editors—or, less often but at least once annually, whenever the full board of main and area editors—convene as a group, there inevitably arise large and problematic questions that must be resolved about how to structure certain particularly challenging, large composite entries on subjects that, for linguistic, historic, cultural, and other reasons, have to be approached in different ways from different disciplinary perspectives. How, for example, is the entry on “Nature” to be organized and presented, when the very terms for, and concepts of, “nature” have greatly differed and evolved over the centuries—from φύσις, κόσμος and κτίσις in the Greek, and natura, cosmos, and creatio in the Latin, to the English “nature,” German Natur, French la nature, Italian la natura, Spanish la naturaleza, and so forth? Discussing, debating, and negotiating our way to final resolutions of such questions require of all editorial participants, each of us speaking for a different disciplinary vantage, the utmost scholarly care, precision, circumspection, and also, quite frankly, collegial patience, tact, and diplomacy.

What do you hope readers take away from the encyclopedia?

An appreciation of the profound and boundless value of the Bible as a religious document—or, more precisely, compilation of many documents—that has continued to live and grow through its reception by different peoples, and in almost countless versions and translations, around the world over the centuries.

How are you able to bring insights from the project into your teaching?

It would be hard to quantify how often insights from my work on EBR come to bear in different ways upon my teaching. Both through my labors at soliciting and editing the countless procession of drafted articles that come my way for review, as well as from my researching and writing the many articles I myself have contributed to EBR, I continually happen upon new insights that in one way or another find their way into my formal lectures, PowerPoints, or casual spontaneous observations or asides offered during a seminar discussion. I also not infrequently have hosted as guest speakers in my classes, both in person and also remotely, fellow EBR editors and other scholars whom I have gotten to know through their contributions as authors to EBR.

I would urge anybody who has not already had a chance to peruse an already published volume of EBR, whether in its hard-copy or online version, to get access to one soon and take a look. I challenge anybody not to find something unexpected or surprising in any one volume of EBR.