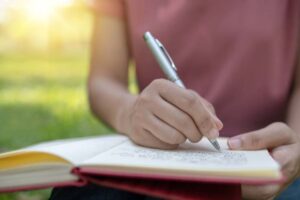 First-year students, sophomores, and juniors are invited to compete for the 2021 Jean Corrie Poetry Competition Prize.

A maximum of three poems may be submitted, each in a separate attachment. All poems submitted must be original and unpublished in campus publications or elsewhere, including on blogs and anywhere else on the internet.  The poems must be labeled with the name of the prize “Jean Corrie” for which you are eligible.  The writer’s name, class year, email address, and phone number must appear in the body of the email but not on the poems themselves.

All entries must be submitted to Maureen Mulrooney, administrative assistant, Department of English, no later than noon on Friday, Feb. 19.

The Jean Corrie Prize ($100 by deed of gift) is sponsored by both the Department of English and Academy of American Poets.

Entries are judged by award-winning poets.  The judge this year will be Edgar Kunz, author of the poetry collection Tap Out (Mariner/Houghton Mifflin Harcourt, 2019), a New York Times New & Noteworthy book. Originally from New England, Kunz lives in Baltimore where he teaches at Goucher College and in the low-residency Newport MFA. He has received fellowships and awards from the National Endowment for the Arts, MacDowell, Bread Loaf, Sewanee, and Stanford, where he was a Wallace Stegner Fellow. He is working on a book of poems about love and late capitalism.