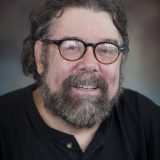 Originally hired as the department’s evolutionary biologist, Wayne taught the first iteration of both molecular biology and developmental biology. As molecular approaches began to infuse biology, Wayne embraced the innovation and recreated himself as a molecular evolutionist on the cutting edge, well before it became popular and now essential. Teaching evolution was Wayne’s passion and joy as remembered by many students who enrolled in and cherished his classes.

As Prof. Megan Rothenberger ’02 recalls, “He challenged us to do more than we thought we could do in the classroom, but he inspired with sheer enthusiasm. He never tried to be fancy in the classroom–he used those damn handouts and that overhead projector until the end–but for those of us willing to stick with him through all those papers and transparencies, we got those eureka moments of understanding evolution!”

He was a mentor to many students and to faculty, with generous observations of faculty teaching and his advice often delivered with humor. Colleagues paid particularly close attention when his parrots were giving their sign of approval in the background. Wayne served as department head from 2000-09.

“When Wayne needed to exude some authority, he’d slip on a tie he kept knotted and loose on the back of his office door,” says Prof. Nancy Waters. “Probably that same tie moved with him into Rockwell.”

Wayne oversaw the hiring of many women into faculty and staff positions, giving him such pleasure and pride that, as Nancy recalls, “We nicknamed him ‘one of the girls.’ He was just that empathetic and sensitive.”

Prof. Elaine Reynolds remembers calling Wayne after her interview at Lafayette and appreciated his advice even before accepting the position. He provided a roadmap, but never a recipe as to how to progress towards (and through) a tenure review. “It’s your bus to drive” was heard by more than one pre-tenure faculty member in the department.

“On International Darwin Day, we struck up a conversation about teaching evolution, and I mentioned to him how I thought the Flying Spaghetti Monster was so funny,” says Prof. Khadijah Mitchell. “A few weeks later Wayne left me a gift in my department mailbox. It was an FSM T-shirt and a witty note about noodly appendages. Whenever I wear the T-shirt, I remember Wayne’s thoughtfulness, kindness, and humor.”

Several members of the department fondly remember his good humor and wit at department meetings. He had the ability to cut right to the core of the topic to break through tension and confusion with wit and clarity.

As a scholar, Wayne had a passion for cichlids (freshwater fish of the family Cichlidae, native to the tropics) that he shared with his colleagues, students, and experts in his field. His biology colleagues note that his sheer enthusiasm for his work was amazing and that his brilliance as a scientist early in his career at Lafayette was nothing short of dazzling. Wayne was an appealing mentor for students eager to tackle questions of fish evolution and a “rock star” in his field, they add.

“When I was at Boise State giving a talk in 2012, I had taken this job but hadn’t really met Wayne,” recalls Prof. Mike Butler. “However, one of the faculty at BSU nearly jumped out of his chair when I said I was going to Lafayette, as he got all fanboy about Wayne and his cichlid work. I think he would have asked me for Wayne’s autograph if I’d been heading back to Boise again.”

Wayne also was a consummate musician and performer. At a president’s picnic in the late ’90s, he fronted the entertainment with his band, Snapperhead Zydeco. With one of his many collectible accordions and sweatbanded brow, Wayne crooned with a powerful Cajun howl and creole drawl in that amalgam of jazz, blues, and Caribbean flair. Elaine and her family traveled to the Knoebels amusement park to see Wayne with his band in the early 2000s. Wayne played with that zydeco band as well as a Celtic band and performed solo locally.

His biology colleagues note that Wayne had a big heart, and he put it into everything he did.