A gifted teacher, he led the Philosophy Department for nearly three decades and was a vigorous advocate for it. 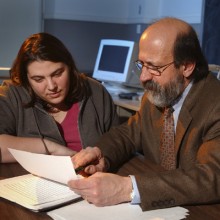 Professor George E. Panichas, your dedication to the education of your students is evident in their success.

A motivated and rigorous teacher, you have taught broadly in the curriculum, teaching courses such as Introduction to Philosophy, Basic Social Questions, Ethics, Political Philosophy, and Philosophy of Law, inspiring a love of philosophy in countless students.

George, you served as editor of Marx Analyzed: Philosophical Essays on the Thought of Karl Marx and as co-editor of Sex, Morality, and the Law. You’ve published articles on your areas of research interest—rights, political philosophy, and philosophy of law.

George, you were an active and visible member of the Lafayette faculty. You served as the head of the Philosophy Department for nearly three decades. In service to the College, you were elected to and chaired several committees, including the Enrollment Planning Committee, Student Appeals Committee, Joint Committee on Student Conduct, and Curriculum Committee. In addition, you served as a member of the Faculty Academic Policy Committee, and you were coordinator of the Ethics Project, which sponsored talks, seminars for faculty, and related activities.

George, you had a great talent for getting others to open up to you so quickly. Joe Shieber, associate professor of philosophy, recalled the time the department was at a philosophy conference in Philadelphia interviewing candidates for an open position. After a long day of interviews, you and he happened to go out for dinner at one of those fancy restaurants south of Market East in Philly. Within minutes of finishing your meal, you had engaged diners from other tables in conversation. You found out that some of them were Lafayette alumni, with others you discovered they shared your Rhode Island roots, and with still others you found a common interest in motorcycles.

Owen McLeod, your former colleague, had this to say about you, George: “Many people know George Panichas as the pugnacious, anti-establishment figure from faculty meetings of yore. Others know him as the martini-guzzling, cigar-chomping, linguistically colorful host of certain late-night dinner parties on College Hill. Still others know George as the man whom a handful of people at Lafayette College love to hate.

“The haters don’t know the George I know: the man who worked tirelessly to expand the Philosophy Department from three full-time faculty members to six; who, during his nearly three decades as Head of philosophy, vigorously defended the interests of our department and was never the administration’s toady; who, without compensation and at great cost to himself, served as counsel to many faculty members who had been treated unjustly in one way or another; and who, more than 20 years ago, hired me into my first tenure-track job, then encouraged and fought for me every step of the way, knowing all the while I could never repay him.

“The George I know identified dozens of struggling undergraduates over the years, brought them under his tutelage, and helped them acquire the confidence to recognize their potential and the skills necessary to realize it. Through the brilliance of his classroom instruction and his contagious passion for philosophy, George earned the respect and affection of hundreds of students, including many of Lafayette’s finest. No one will ever attract more of our students to philosophy, or instill in them a truer love for the subject, than George.

“A couple of years ago, George and I were discussing the situation of a colleague who was going through a rough time. For me, this was just a story about someone I didn’t know well enough to really care about. But for George, who didn’t know this person any better than I did, their situation was a source of genuine concern. I was impressed, not for the first time, by George’s capacity for sympathy. ‘In spite of your tough guy image,’ I said, ‘you’re actually an incredibly sweet person.’

“George leaned in and whispered, ‘Don’t tell anybody.’”