Monika Rice, assistant professor and Robert Weiner and Ilan Peleg Scholar in Jewish Studies, is teaching this class in the spring. Registration is still available. 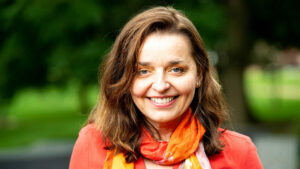 How did you become interested in the topic of Jewish-Christian relations?

I became interested as part of my faith journey. As a teenager growing up in Poland, I felt a desire to pray with the Scripture in its original language (or what I thought was the original language), and that led me to a course in ancient Hebrew offered at a Catholic seminary in my hometown. Through this experience and my subsequent studies, I discovered the complex nature of Jewish-Christian relations.

Jewish-Christian interactions are particularly complicated in Poland where Jews were originally welcomed by the rulers and found refuge from expulsions and persecutions in Western Europe. Thus, the Jewish community was able to grow in size and create unique expressions of Judaic faith and scholarship, becoming before WWII the largest diaspora in Europe.

Unfortunately, as the Catholic Church’s document “We Remember: A Reflection on the Shoah” (issued in 1998) states, “The history of relations between Jews and Christians is a tormented one,” and the balance of these relations over 2,000 years “has been quite negative.” Europe, and Poland as the first country occupied by Hitler, became, tragically, the cemetery for the Jews killed in the Nazi extermination program.

While Christianity did not create Nazi antisemitism, its tradition of anti-Judaism did pave the way for the indifference and even rejection of the obligation to care about neighbors who were being targeted. This is a legacy one cannot shed or avoid if one takes seriously one’s background. Being Polish and being Christian compelled me to seek to understand this complicated history.

What might surprise someone the most about the Jewish-Christian dynamic and/or history?

What students may find surprising studying this topic is that there are some misconceptions in popular culture or even in popular history material that do not give justice to much more complex history. For example, there is a misconception that the Inquisition was created for the purpose of the persecution of the Jews. In fact, it was established to eradicate Christian heresy, and practicing Jews–who are not heretics according to Christian theology–could, thus, not be investigated by the Inquisition. Rather, this institution focused on converted Jews (so called “new Christians”) who were secretly adhering to Judaism.

Another misconception is that racial antisemitism, one that assumes Jews cannot be “changed” as their “Jewishness” is a matter of biology, is a modern invention. In fact, another case from Spain challenges this claim: 15th-century laws called “limpieza de sangre” (or “purity of blood”) prevented the descendants of Jewish or Muslim converts to Christianity from holding state offices or entering certain religious communities. This was a puzzling antecedent of Nazi racial laws.

These are just two examples of ideas that circulate on a popular level and create misconceptions about our past.

How would you describe the state of Jewish-Christian relations today?

It is at an extremely exciting and important point. While most Christian churches, beginning with the Catholic Church, have made official statements of apologies and sincere gestures of repentance for anti-Jewish teachings and traditions, thus contributing to a less suspicious, more positive, and cooperative inter-religious dialogue, the debate about the role of Pope Pius XII is far from being over. The archives containing sources referring to the wartime period of Pius XII’s activity were recently opened but became almost immediately unavailable for researchers due to the pandemic.

Realistically, it will take a few years before serious research on this material can resume again and be presented. It might result in significant reassessment of the Pope’s and the Vatican’s activities during WWII pertaining to the Jews. This is probably the most anticipated issue that researchers look toward working on, which will also inform the more practical relations between Jewish and Christian leaders.

What would you say to a Lafayette student who is considering taking this course?

Whether you come from a religious background or not, and whatever that background might be, I’m sure you will find it fascinating to explore how the relations between two Abrahamic faiths have evolved throughout the past two millennia. The course covers a large part of recorded human history and has an extensive geographic span. It is designed to teach us about human capacity to express one’s religious convictions and to explore how they influence human actions through history, with the best and the worst results involved.

I am also excited that we will be using primary sources to understand how people thought in the past. As in all my courses, vibrant discussions are an essential part of the classroom experience.