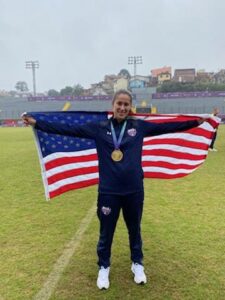 Ani Khachadourian ’25, a Lafayette women’s soccer midfielder who headed to Caxias do Sul, Brazil last month to compete in the Deaflympics, came back home with a gold medal. The U.S. Deaf Women’s National Team (USDWNT) defeated Poland in overtime to take the top spot in the tournament. The women also beat Brazil (who finished third overall), Japan, and Kenya to advance to the gold medal match—keeping the USDWNT undefeated in international competition.

The Deaflympics provided a chance for Khachadourian to interact with deaf athletes from all over the world, which gave all of the women involved a chance to recognize how they have individually responded to their own levels of hearing loss.

“A lot of players from other countries were coming up to  us and signing, and it was so cool talking with these people from the other side of the world when you share a common disability. Even watching my teammates signing back and forth was interesting, because many of us speak and aren’t always signers, which has caused a huge stigma in the deaf community. There’s the perception that if you hear and don’t sign, you’re not deaf. But overall, the experience was amazing, and just being with everyone from these teams was awesome.”

The rhythm of having a game every two days also gave the U.S. team a chance to practice together more often, and experience the Brazilian culture through group dinners and other events. The team was bonded “from the very beginning” Khachadourian said, but just the overall experience of being at this tournament, away from home and competing for their country, brought them even closer together.

“We see each other maybe twice a year, and we are still as close as ever,” she confirmed. “Having those team dinners and being able to just relax with the team, or hanging out in each other’s rooms at night—that’s the best time for us to bond, and we bond so quickly just because of our shared struggles and experiences.”

The USDWNT now have their sights set on the Deaf World Cup in South Korea in 2023, which Khachadourian is already looking forward to. She became confident in her own play at the Deaflympics, but recognizes that it’s a team sport, through and through.